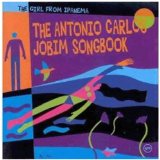 This afternoon, I was listening to Cassandra Wilson‘s “Waters of March,” which is an English cover of Antonio Carlos Jobim & Elis Regina‘s  Portuguese duet “Águas De Março.” I thought Ms. Wilson’s rendition had a nice jazzy flow to it, but I am usually partial to original works, and am very critical of most covers. That’s a topic for another post – should covers be close to the original, or bring a totally different sound? But I digress…I have been a fan of Jobim since the first time I heard “Girl From Ipanema” back in college, and it forever sealed bossa nova as one of my top five favorite music genres.

Years ago, I purchased The Antonio Carlos Jobim Songbook, and heard “Águas De Março” for the first time. It is a playful duet between Jobim and an amazing vocalist, the late Elis Regina (“The Voice of Brazil”). I remember reading the lyrics, finding them rather average, but the lyrical banter between Jobim and Regina gave the mysterious lyrics life. This is the same life I feel when enjoying most music that is sung in a language other than English. Perhaps this is why Ms. Wilson’s cover appealed to me vocally, but without the exchange between Jobim and Regina, it became just another nice tune. Clearly it did not move me the way the original had.

So this made me think…does the language of the lyrics affect our sensitivity and attitude toward musical pieces?  What do you think?